Congressman Walter B. Jones urges EPA to stand with

WASHINGTON, D.C. – Today U.S. Congressman Walter B. Jones (NC-3) and fellow members of the bipartisan Congressional Sportsmen’s Caucus urged U.S. Environmental Protection Agency (EPA) Administrator Lisa P. Jackson to deny a petition from environmental organizations to ban the use of lead in fishing products.  The petition, which is opposed by fishing organizations organizations across the country, would hurt recreational fisherman by driving up costs on traditional fishing tackle.  Jones and his colleagues believe there is no scientific evidence demonstrating that a ban is necessary.

The text of the Congressional Sporstmen’s Caucus letter to EPA, which was signed by 78 members of Congress, follows below:

As members of the bipartisan Congressional Sportsmen’s Caucus, the largest and most active caucus on Capitol Hill, we are writing to urge you to dismiss the petition to ban the use of lead in fishing products.  The attached letter from leading hunting, fishing and conservation organizations clearly points out that there is no scientific basis to warrant such a far reaching ban on traditional fishing equipment.  A similar proposal to ban lead fishing tackle was dismissed by the EPA in the mid-1990s, because there was insufficient data to support such a ban – there is no additional data to support a ban today.

The American wildlife management model is the best in the world, and one of the pillars of this model is that the states retain the authority to manage most of their fish and wildlife.  These state agencies are already monitoring and addressing any of the localized issues surrounding lead, making this draconian ban not only unnecessary, but intrusive.  In a letter to you on this very issue dated September 2nd, the Association of Fish and Wildlife Agencies, which represents the collective perspectives of the 50 state fish and wildlife agencies, concludes, “A national ban on lead fishing sinkers is therefore neither necessary nor appropriate.”

The President’s “America’s Great Outdoors” initiative is aimed at reconnecting Americans to the outdoors; fishing is an accessible, fun, family oriented activity that should be embraced and encouraged as part of this initiative.  A ban on traditional fishing tackle will drive up costs substantially and serve as a disincentive for more Americans to get outside and enjoy this great pastime.

There are 60 million recreational anglers in America that contribute $125 billion to our economy annually.  Penalizing these men, women and children that are the best stewards of our environment, as well as the financial backbone to fish and wildlife conservation in our country, would be a terrible and unnecessary injustice.

We urge you to deny the petition to ban the use of lead in fishing products.”

ARE YOU PIPING MAD YET?

WATCH THIS VIDEO AND YOU WILL BE!!!

Piping Mad: Fair People at the Mercy of a Government Gone Fowl from Kevin Hicks on Vimeo.

This documentary video is being distributed nationally by the OBPA, NCBBA (North Carolina Beach Buggy Association) and CHAC (Cape Hatteras Anglers Club) thanks to a generous gift from

Please share this video with others who share our passion for common sense access to national resources such as the Cape Hatteras National Seashore Recreational Area.

If you have questions, please contact us at This email address is being protected from spambots. You need JavaScript enabled to view it.

Select Membership / Donations on the menu bar above.

The OBPA announces the 2010 Annual Members Meeting will be held on September 25, 2010 at 7:00 p.m. at the Cape Hatteras Anglers Club.  All who are able are urged to attend to hear reports on recent events and plans for the future.

Stand in the Sand III 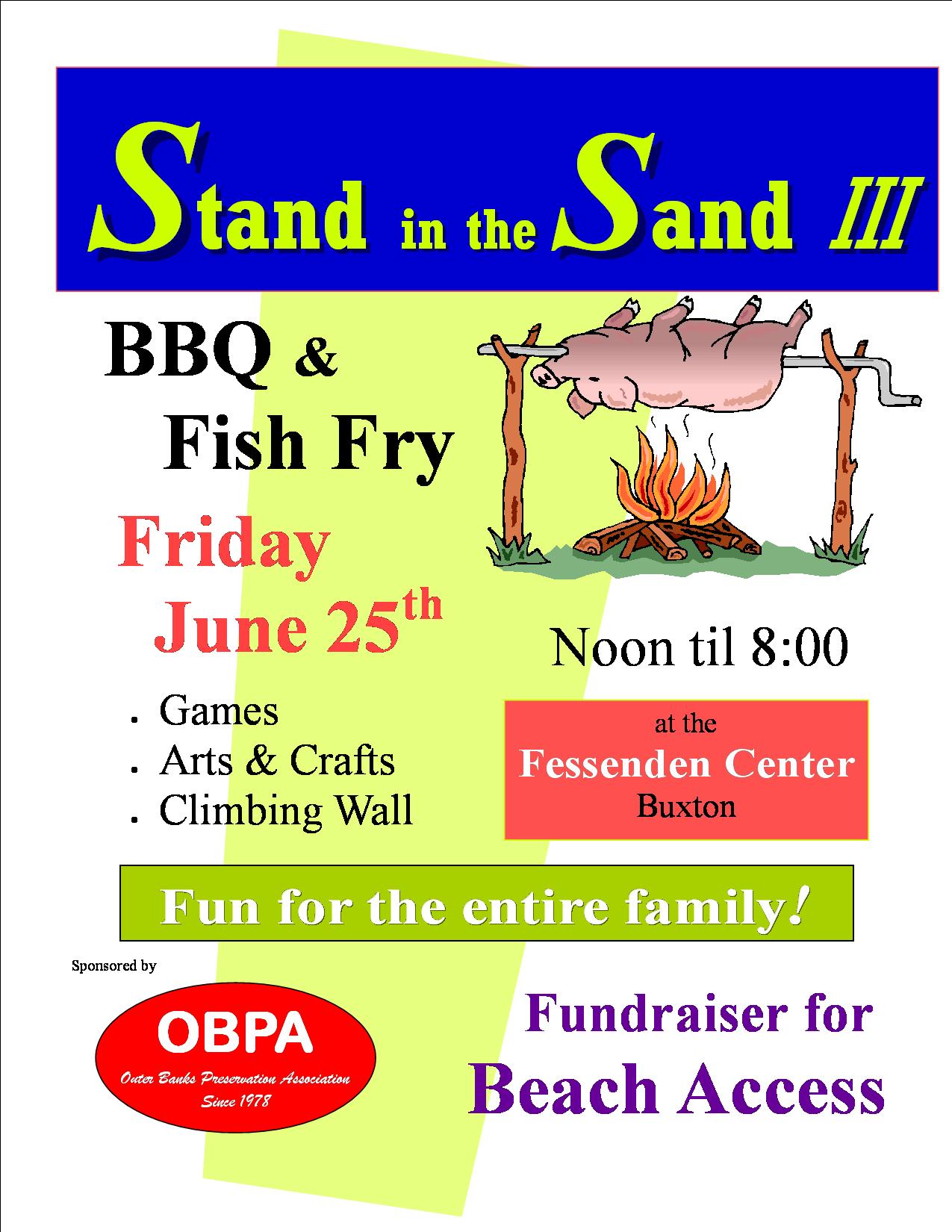 Senator Burr Comments on Beach Access at Public Meeting in Manteo - May 21, 2010

The Senator spent the hour speaking on local topics and taking questions about the beach closures, replacing the Bonner Bridge and outrageous rules that have strangled the local commercial fisherman.

Senator Burr preached “individual responsibility.  I can’t paint you a pretty picture.”  He elaborated by saying the revenue loss at local levels was putting a tremendous strain on local governments.

Commissioner Chairman Warren Judge responded with, “We could put our people back to work if we could just have access.  We could do so much.”

Burr acknowledged that access was “pivotal to economic growth.”

OBPA President, John Couch, thanked Senator Burr for his help in the OBPA’s efforts to get a 30 day extension to the DEIS comment period.  Laughingly, he added, “I am surprised they turned you down!”

Couch proceeded to tell Burr that the bird closures were stifling the local economy.  As bad as it was, the Consent Decree had become the baseline for resource management and the policies described in the DEIS were much more restrictive.  Everything at Cape Point was closed.

The OBPA president continued by asking for common sense solutions and emphasized that protecting the environment is important.  But, giving 771 acres to a piping plover?

Burr agreed that the beach issue has always been a difficult thing and he was also surprised that the 30 day extension for the DEIS comment period was not granted.  “This administration has gotten everything they ever wanted.”

The Senator moved on to address the problems with being in Judge Boyle’s courtroom.  “It’s hit a nerve with him.  It seems personal,” Burr continued. “We are working to create some leverage.”  He also claimed to be desperately trying to move Senate bill S-1557 out of committee and onto the floor.

“We are not going to go away,” Couch responded, referring the people who are pro-access.

Burr continued on with other subjects.  He stated that some people are rolling the roulette wheel about the Bonner Bridge.  He also covered the subject of increasing the budget for dredging Oregon Inlet.

To the problems facing the local commercial fisherman, the Senator admitted that “we handled this wrong with the Bush Administration.  The fisheries are trying to put an end to east coast fishing – putting it out of business.  I am trying to defund this effort – it’s the only tool we have and we are going to do it.”

When the hour was up, Senator Burr finished by saying that Washington was feeling the frustration of the American people.

“We get it,” Burr concluded.